Time for a Little History Lesson!

named for the Temperance Movement in U.S. history, was a social movement against the consumption of alcoholic beverages.  It began as early as the American Revolution in Connecticut, Virginia and New York.  People preached - and pledged - abstinence of alcohol throughout Europe and America for many reasons.

History shows that by the early 1800's, the average American over 15 years of age drank nearly seven gallons of alcohol a year (three times as much as we drink today)!
Alcohol abuse, primarily by men, wreaked daily havoc in families as women, with few legal rights, and many children to raise, were totally dependent on their husbands for support.

With the formation of the American Temperance Society early in 1830, the movement grew quickly throughout the states.  Maine, which was the first state to adopt actual temperance laws and guidelines, served as a model for other states.

Temperance fountains were built in public places to provide safe drinking water in hopes of keeping people out of the saloons and away from consuming alcohol.  Concerns over alcohol consumption also gave way to other important social issues such as slavery, ill treatment of marginalized people, and in much later years, women's rights.

Now, aren't you happy to have that little history lesson!  This collection was inspired by a little T-quilt from the mid-1800's which I so thoroughly have enjoyed owning.

The blues are represented from the light hues all the way to the very dark, rich indigo.  T is for Temperance Quilt has been designed for this collection.  Notice the upside-down T's on two corners of the quilt!

This line is currently being sold by P & B Textiles/Washington Street Studio and distributors.

Posted by Evonne Cook - The Clothesline Quilter at 8:30 AM No comments:

Email ThisBlogThis!Share to TwitterShare to FacebookShare to Pinterest
Labels: My Fabrics, My Patterns, P & B Fabrics, Washington Street Studio

Kits for Christmas Baskets are Ready at Calico Annie's 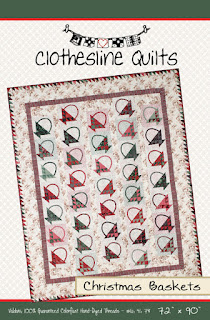 Time for a new Christmas quilt at your shop/house!


Yes, there is still time to have a new Christmas Baskets quilt sewed and ready for the holidays this year!

Call Calico Annie's Quilt Shop in Fullerton, Nebraska,
for a kit and sit down to enjoy some wonderful
stress-free sewing.   These fabrics are from the Christmas Remembered Collection!

Posted by Evonne Cook - The Clothesline Quilter at 4:35 PM No comments:

I'd be honored if you would grab my button! 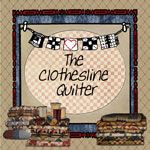